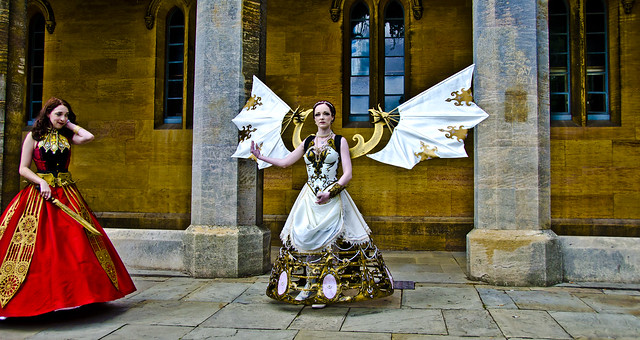 So I spent the weekend parading about like some sort of clockwork menace at The Asylum, Lincoln’s steampunk festival.  I managed to complete my steampunk predator cannon in time and took this along with my steampunk mask.

I had a great time and the costume was well received – I couldn’t go more than 10 meters without being mobbed by photographers, but I guess you’ve got to expect that if you’re dressed up like a lunatic 😉 I spent a fair chunk of the weekend like this!

The mechanism for the cannon held up pretty well and didn’t break.  There was some slippage or stretching of the cable which meant that the lever that raises the whole assembly didn’t bring it up the whole way after a while.  I could compensate for this by using the up/down motion however.   I got talking to a chap that I know who works in special effects and he was able to give me a few pointers, for example soldering the ends of the bike cable so that they don’t fray, and using cable junctions (this sort of thing, minus the plastic) to connect the cables.

He also suggested creating a hand control, which makes alot of sense.  I think I might rework this doing exactly that.  That way I can control the gun without it looking too obvious that I’m directly controlling it.  I can also exert abit more force with my hand than I can on a wrist mounted control box.

I also gave a talk about the creation of the costume at the event.  I didn’t think anyone would show up initially but in the end I had about 20-30 people and managed to talk for about 20 mins or so.  A fair few techniques went into the creation of the costume so I had a fair bit to say.  Alot of people asked questions and it was quite a receptive audience so it ended up being really fun.  I’m afraid you can see my face in these pics….. 😉

So I had hoped to post some more in-progress pic of the construction of this thing, but with The Asylum 2015 rapidly approaching I’ve had to get cracking in order to get ready in time.

Here’s the costume so far.  I’m using a version of my mask and backpack that I’d constructed for previous events, I’ve modified the backpack to include the wooden arm so I can mount the gun on my shoulder however.  I’ll hopefully have some more complete pics soon.

So the last time I posted, the shoulder cannon was basically just a wood and metal mechanism without an actual gun.  It’s come some way since then.  I’ve covered the wooden arm and mechanism in a layer of styrene plastic and spray painted everything green.  The gun is also mostly constructed from styrene and various other found pieces like lids from spray paint cans and contact lens containers.  There’s also a bicycle pump in there and I also cast some copies of those nitrous oxide canisters to include on the side as they’d weigh less than the real thing.

I also had a go at doing some paint chipping effects by painting the model silver in places then applying some torn up pieces of masking tape.  I then spray painted everything green.  Once it was all dry I peeled off the masking tape.  It doesn’t look too bad for a first try.  I gave the whole piece some washes of brown and black oil paints for weathering.

Here’s a video of the gun moving.

So yesterday I attended an exhibition for ‘The Imaginarium’,  a series of steampunk images by Gary Nicholls and featuring costumes and props by Julie and Peter Walton amongst others.  One of my masks has also made it into a few of the images too 😉

The official website is here.  Here’s an example of one of the images.

“The nemesis is born” by Gary Nicholls

And here’re a few with a familiar looking mask 😉

“When we dance angels run and hide” by Gary Nicholls

These pics don’t really do the images justice – they were printed on aluminium sheets at the exhibition and looked incredible.  Some of Peter’s amazing steampunk creations were also on display as well as several costumes.

Oh yeah. I forgot to mention I took a few bits and bobs along to the Surrey Steampunk Convivial a few weeks ago.  We had a small exhibition in the illustrious location of the church hall kitchen 😉

It was nice to be able to share my various sculptures with people as they’ve only seen the inside of my front room so far.  As usual the mask proved popular.  One chap said he was using it as his facebook profile picture which was nice.

My gauntlet also garnered a fair bit of interest.  Here’s Pandora and Lance modelling it!  I was thinking I should set up a stall where people can come and try on my stuff 😉

And here’s a pic of the angel.  I’ve not had a chance to do a proper batch of photos of this one yet, so that’s due.

Here’re a few more pics too.

Happened to pick up a book called the Steampunk Gazette recently and found a picture of my mask!

Rather unfortunately it’s been credited to someone else which was rather annoying.  Luckily I know the chap who edited the book so I was fairly sure it was a simple admin error rather than something more untoward.  Still, nice to be featured.

A quick vid of the mask

Finished the mask.  Here’re some pics.

I’ve not tried this before, but having spoken to someone at the Asylum last month it sounded dead easy so I decided to give it a go.  Turns out it’s dead easy!

Here’s my first try, a sort of lens holder:

It took abit of trial and error but I’m quite pleased with the result.   Not bad for a first effort.   The ‘lens’ is actually the front of a watch.  I can see quite a few possibilities for making steampunk goggle here, so much so that I’ve just ordered 100 watch faces off ebay ;0)

Once I’d had abit of a practice.  I turned the blowtorch on the steampunk mask I’m making.  Everything’s now securely fastened together.  It was always abit of a challenge to get cogs and gears to stick together, so much easier now you can simply solder them in place.

I’m continuing to work on my commissioned piece which is a replica of my previous steampunk mask.  I’m enjoying the opportunity to improve on the original this time round.  Here I’ve started on the lens apparatus that sits on the side of the mask.

This was previously made from bits of broken camera which were painted brass.  This time round I’m fashioning them from brass sheet and a variety of bits and pieces including spy holes which are normally installed in doors and a variety of plumbing pieces.  The copper pipe is car brake pipe.

I’m quite pleased with it – it looks a hell of alot cleaner and realistic than the original version.

I’ve just bought a blow torch which I’ll be using to solder the copper and brass elements together. Should make things nice and secure however and should hopefully look quite nice too.

I’ve not done any soldering of this type before (only for electronics) so I was actually unaware you could solder brass and copper.  It looks pretty easy from what I’ve seen online so I’m eager to have a go.

It opens up a wide range of possibilities if I can get the hang of it however as half the battle when making stuff out of found objects is figuring out how to attach them together.

Here’s a close up of the lens pieces.  I’ll be putting blue LEDs behind them so they should have a decent glow coming out of them.

Finally here’s a pic with the first few dreadlocks attached to the leather skull cap.